and all parts of the country. Kroll’s was established by Harry and Caroline Kroll, who sold the business to Harry’s sister and her husband, Isabel Kroll Schauer and Dick Schauer. For more info and trivia on Kroll's East, click here.

On November 14, 1945, the doors were opened under the new ownership. Since the very beginning the mission of Kroll’s East has been to serve quality food at affordable prices. To achieve this, the butter hamburgers were made on the premises and still are today, now using high quality Black Angus beef. Originally serving just butter burgers, hot dogs, brats and french fries, the menu 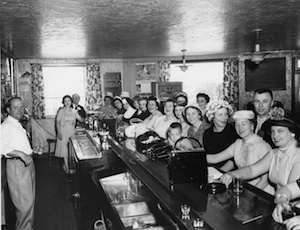 expanded with the addition of chili and then vegetable soup and dumpling soup. Isabel was a great cook, and in the late 1940’s, she developed the soup and chili recipes that are still used today.

Then in 1969, Dick and Isabel’s son, Jim, joined the family business. Sadly, Dick Schauer died in January of 1972, and at that time, Jim began taking over a lot of the day to day operations including beginning a major remodeling project in 1974. The bar area was enlarged and completely renovated, except for the back bar area, which still includes the original green tile and mirrors that were imported from Italy. In addition, the original black, red and yellow tiles can still be found on the outside of the building by the Irene Street entrance; this tile pattern was originally throughout the building.

In the 1980s, Jim’s wife, Bette, began working at Kroll's East, and they are now very proud to have been joined by their daughter, Jenny, and sons, Ben and Nathan. A side-note of pride is Ben’s service with the United States Army Reserve, where he retired as a Lt. Colonel after 22 years of service and has served two tours of duty in Iraq, and one tour of duty in Afghanistan.